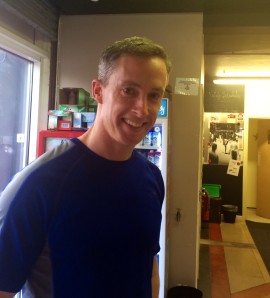 One of BYC regulars, Donald Cronin 36 from Cork, CEO of Alanya Animal Health Monitoring, shares his inspirational story of how Bikram helped him ditch pain medication and recover from the most challenging time of his life.

Donald! Thank you for speaking to Bikram Yoga Cork.

Tell us, what were your reasons for starting Bikram?

June bank holiday weekend 2010 I was driving along the flyover in Douglas heading towards the Kinsale road roundabout when some lunatic swerved in front of me and jammed on his breaks.  I stopped short of crashing into him but an elderly man driving a 4×4 pulling a cattle trailer wasn’t so fortunate and slammed into my stopped car.  The impact of the crash severely damaged the muscles at the front and back of my neck, all down my spine and ruptured several discs in my spine.  Additionally, the force of the impact damaged the glands in my neck severely; apart from the pain, I experienced constant recurring glandular problems.

I attended physiotherapy at least twice a week every week for 18 months and was receiving pain control injections into the top of my spinal cord every 3 months on top of taking strong painkillers every day.  I gave up coaching rowing and any time I exercised I had to take it easy which for someone that was involved in competitive sport was extremely frustrating.

In January 2012, on my birthday, my partner walked out.  It deeply affected me at the time.

A few weeks later I had reconstructive surgery on my nasal passages.

After that I had the court case for the car crash, which wasn’t particularly nice.

Just when I thought things couldn’t get any worse one of my best friends, cousin and business partner Nader Fares, started suffering from liver failure.  He started going downhill rapidly and by April 2012 it was clear he would need a liver transplant pretty soon.

All of these things, no matter how small or petty they might sound, they added up and they were taking their toll on me both emotionally and physically.

One evening I started chatting to someone about yoga. To be honest, I thought it was a load of bollix but I was willing to give anything a go at this stage.

I went to my first class the next evening.  The pain relief was the first thing that hit me.  There was instant relief.  Second to that, my head just felt much clearer afterwards.  That night I stopped taking painkillers.  The next day I cancelled my physiotherapy session and went for another class.  Since my first class, I haven’t had one session of physiotherapy, I haven’t needed to take painkillers and I no longer need pain injections.  When I travel, I check online for a Bikram Yoga class near my destination and after my meetings, I head straight for a class for some instant pain relief.  I’m now beyond using Bikram for pain relief because my pain is gone.  I go now because I love the challenge of the hot yoga room and as exercise go, it’s probably the best workout I’ve ever tried.

Sadly, my friend Nader passed away on the 11th September 2012 at the young age of 38.  Bikram Yoga helped me get through this emotionally tough time and kept me positive.  Your health is your wealth after all. 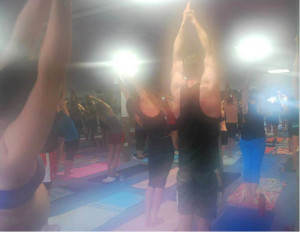 What are your memories’ of your first class?

The instructor welcomed the newbies to the class and told us what to do and what not to do in order to get through the class. I remember giggling to myself thinking this is a load of rubbish.  About 15 minutes later it was more like… Jesus Christ…I want to go home!!!  I was absolutely annihilated

What are your strengths and weaknesses in the hot room and how have they changed since you began? i.e, how has your practice developed?

Strengths:  I’m stubborn enough not to give up.

Weaknesses:  I can barely balance on one leg but I am improving.

What are the main differences you see in yourself from one year ago?

Aside from my back pain being eradicated, I’m much more productive at work, my posture is incomparably better, my diet is much improved and I no longer drink coffee (I used have about 12 mugs of brewed coffee every day).

How is Bikram different from other activities you do?

It almost forces you to look after yourself better.  If you go into the hot room after a heavy night out or if you’ve been eating junk, not eating enough or simply not drinking enough water, the hot room will let you know.

What advice would you give to anyone thinking about taking their first class or anyone in their first few classes who is finding it challenging?

Anyone thinking about starting…Just Do It!  Age doesn’t matter.  Concentrate on your breathing and drink plenty water throughout the day before the class.

Everyone finds Bikram Yoga challenging no matter how long they’ve been doing it.  It’s going to take a few months before you really feel the benefits so just stick with it.  Keep listening to the instructor’s advice and you will improve and reap the rewards.

Many thanks to Donie for sharing his story. Next time we struggling in class good to know its all worth it.